October 2020 edition: What to do about Members?

What to do about Members?

The pandemic has shown us very clearly the value of human capital - our people. Let us hope that going forward this and successive governments invest in the country’s human capital to the same extent as physical infrastructure.

Switching focus to school trusts, if we are asking the government to invest in the education of our children and young people, it is perhaps worth pausing to reflect on whether we are making the most of our human capital. The answer is probably clear and quick in the case of staff, but it may require more thought to answer for those involved in governance at the trust – members, trustees and governors (or equivalent). I have not added pupils and students to this list because their education and care is the core purpose of every trust.

In this article let us concentrate on members. Are members a wasted part of school trusts’ human capital? Before answering this question, some context is key.

Despite the importance of the role placed on members by the DfE (the latest financial handbook included further clarification on members), the reality is the role and responsibilities are still not widely understood. There is good reason for this. There has been uncertainty about the responsibilities of members of charitable companies (limited by guarantee generally), which the Supreme Court has only recently ruled on.

Remarkably until the Supreme Court delivered its judgment in July in Letimaki and others (Respondents) v Cooper (Appellant) there was no firm authority on what the duties of members of charitable companies were? The Charity Commission argued for some time that members had a fiduciary duty but that view was untested.

The Supreme Court, amongst other issues, considered whether or not members of charitable companies have fiduciary duties. In their judgment they described a fiduciary as someone who owes a single minded duty of loyalty to their beneficiary. The Court found that members of charities are fiduciaries who cannot use their powers otherwise than for the benefit of the charity. This is an important and helpful clarification for academy trusts at a time when the role of members is becoming ever more important.

Whilst this helpfully addresses the question of duties, it does not take us much further forward in terms of the role of members. If you look at the DfE’s section on members in the Academies Financial Handbook, it lists various responsibilities that members have either under company law or the model articles of association. Whilst correct, this does not help members orientate themselves about how they can best support the trust in practice. Members that are engaged in their role and drawn into the mission of your trust will be a real asset. To do this they will need to see more than a list of legal powers when describing their role. They will want to understand their purpose.

Ultimately effective governance is about people and effective communication. Members are an important part of trust governance and can really contribute to its effectiveness. However, their effective contribution will not happen by accident.

If you want to invest in your members then as a starting point I offer three words to shape your reflections – clarity, team and context.

Members that are engaged in their role and drawn into the mission of your trust will be a real asset.

You need to have clarity – of role and purpose. Academy trusts should take the opportunity to clarify both the role and responsibilities of members to help aid the effective governance of the trust. In setting out the role, by all means cover the issues set out in company and charity law (and the articles) but don’t forget to tailor it to your trust and its aspirations.

One way we do this with our clients who wish to clarify the role of members is by putting in place a ‘members handbook’ providing a practical reference guide to support their members to carry out the role effectively. The value of doing this is lost if you just "borrow” a set of statements from another organisation. The value is derived through going through the process of discussing it with the board and members. By doing this everyone involved will have a better understanding of what it means to be a member at your trust. 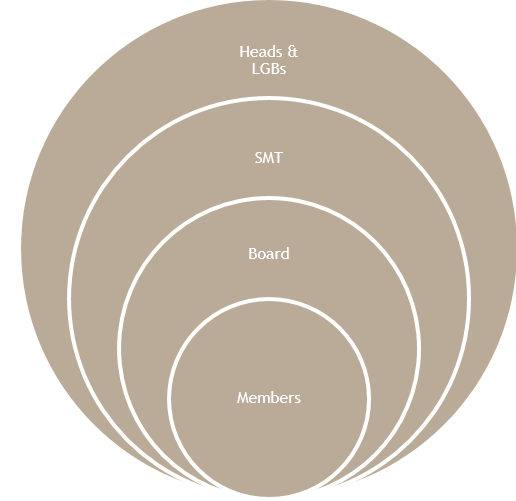 There is so much that could be said about effective teams. However, let’s pick one aspect; trust. Whilst also teams in their own right on one level, the members and the board are also a team. They share a common goal; the effective governance of the trust. If you think of the relationship between your members and your board, do you see the markers of a high trust relationship? For example, do they communicate in a healthy, open way even when discussing tough or touchy topics?

Spending time in developing the relationship between the board and members could be easily overlooked with the challenges of running a school trust in the current landscape. Even if strong, the relationship should not be taken for granted. Perhaps times such as these remind us of the value of human capital, the power of trust and the strength that could be brought to the organisation through effective teamwork right the way through the people and teams within the trust.

Members undoubtedly have important powers. If they are called on to act but have only engaged at the AGM with little in the way of contact in the intervening period, will they be well placed to perform their role effectively? If they knew the trust context well 5 years ago, do they still now?

How do you ensure members have a good grasp of the context without overburdening them or duplicating roles? This is an issue some trusts are grappling with and, in truth, there is no simple answer. Your context will be critical. For example, at times there may be lots to update members on whereas at other times there may be very little. Approaches will vary but may include some form of periodic update which could be in writing or in person (virtually or otherwise).

Recruiting members can be a real challenge. Often the lighter touch nature of the role can help attract and retain people. Within that context, formalising or increasing the importance of the role could be seen as a backward step. I would make the case though that investing in both the role and your members will ultimately bring benefits that offer a really good return on the time that you have to invest in doing so. Now is the time to make that investment.


Back to all October 2020 edition articles