July 2022 edition: Pupil Absence Since the Start of the Pandemic 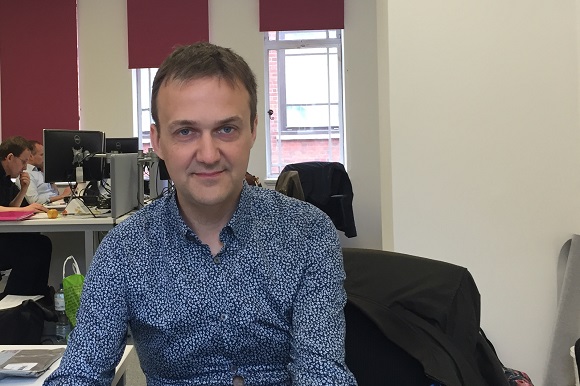 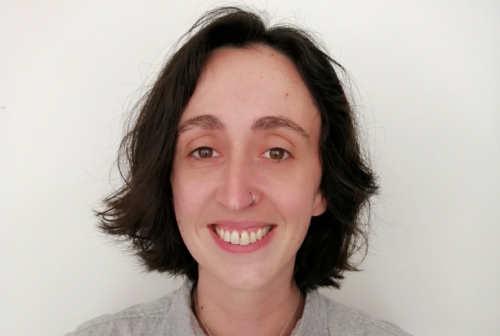 Pupil Absence Since the Start of the Pandemic

We are all only too aware that Covid-19 led to unprecedented disruption for schools. Pupil absence has been, and continues to be, far higher than before the pandemic started. But what is less appreciated is just how uneven absence has been. Some pupils have missed huge amounts of school while others have missed hardly any.

The 2022 CST Annual Conference was a great opportunity for us at FFT Education, as a new Platinum Partner to introduce our work. We were not only able to share our latest research findings, but also to meet and talk to so many CST members. There was a real buzz around the conference and in the workshop sessions and due to the level of interest in our recent work, we share here a synopsis of our workshop, starting with six key headlines from our analysis.

1. Absence remains much higher than usual 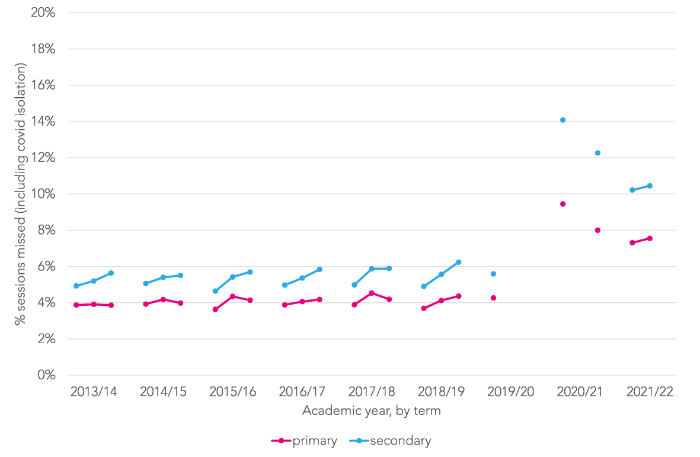 Absence before the pandemic was relatively stable for a number of years. Pandemic-induced school closures – shown as missing terms of data – and large numbers of pupils self-isolating led to mass disruption in 2019/20 and 2020/21.

Although absence rates this academic year have improved, they are still far higher than previous years.

2. Vulnerable pupils have been the most affected 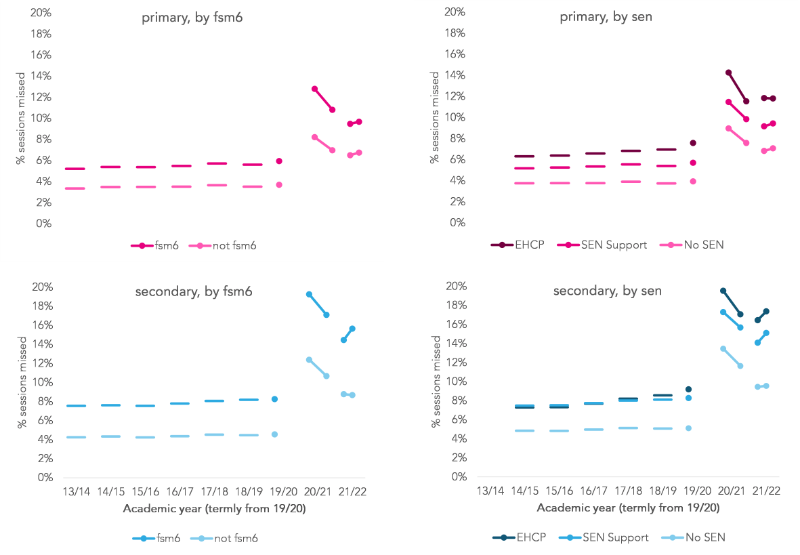 Pupils with special educational needs, particularly those with education, health and care plans (EHCP) have also tended to miss more school than other pupils.

The Department for Education (DfE) define persistent absence as missing 10% or more registration sessions each year. 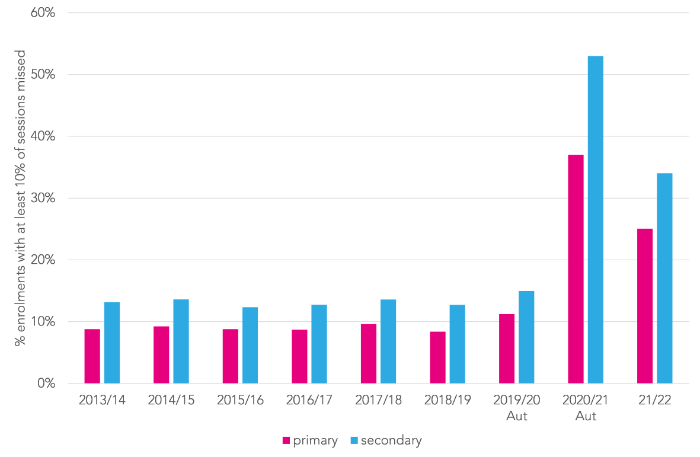 Pre-pandemic, typically around 9% of primary age pupils and 13% of secondary age pupils were classified as persistently absent. By the end of the Spring term in 2021/22, these figures stood at 25% and 34% respectively.

When we tried to account for pupils catching Covid-19 – by taking ten days off every pupil’s longest period of absence – we found that 12% of primary and 21% of secondary pupils would still have been classified as persistently absent. So it looks like there’s more to the rise in persistent absence than simply pupils taking time off with Covid-19.

Some pupils are absent more often than they attend. DfE class this as severe absence i.e. being absent for at least 50% of registration sessions. 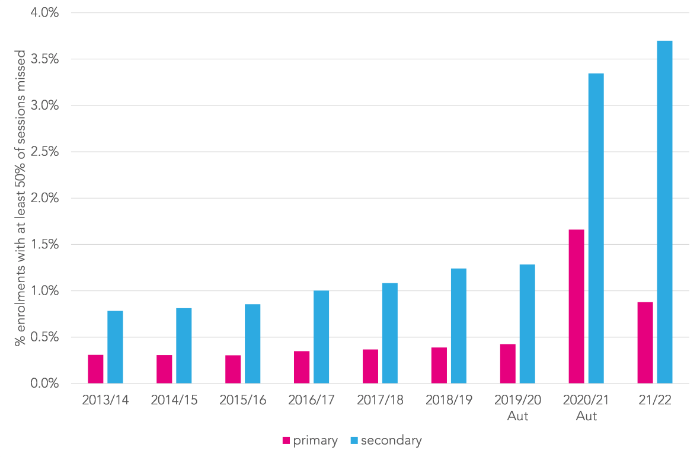 Over half of sessions missed by severely absent pupils in secondary schools were unauthorised absences. This could be because reasons for absence have not yet been established by schools.

5. Many Year 11 pupils have missed a lot of school 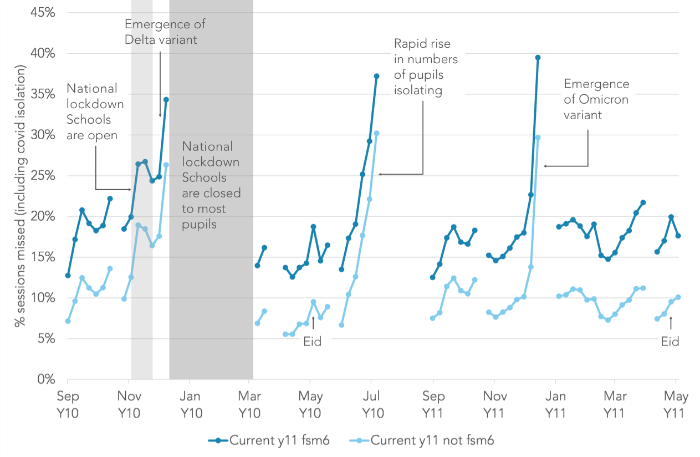 Current Year 11 pupils have missed a lot of school over the last two years. Pre-pandemic we would have seen absence rates of around 6% each term. But rates have been consistently higher since the start of Autumn 2020, especially among disadvantaged pupils.

2022 sees the return of external examination for GCSEs and other qualifications. Increased absence may well lead to a widening of the attainment gap between disadvantaged pupils and their peers.

6. The effect of COVID has been uneven between regions- and this contributes to variation between Trusts

As we show in our FFT Regional Attendance Tracker  tool, absence rates vary by region. For example, pupils in secondary schools in London have missed 8.8% of sessions so far this year compared to 10.8% of sessions in the north east. 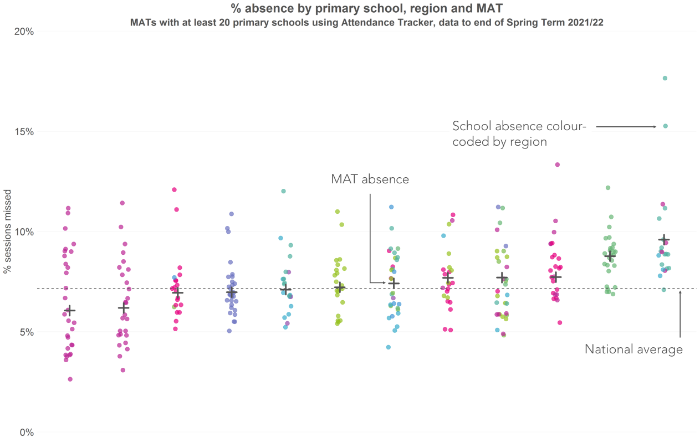 Having outlined how patterns of absence have changed since the start of the pandemic, colleagues from FFT then went on to explore with conference workshop participants how the expectations and collection of data has also shifted. We looked at how this new information can be of benefit to Academy Trusts. We are starting to work on partnership with CST and it's members on creating a CST/FFT tool helping to benchmark within and between trusts and give a platform for collaborative working with similar Trusts.

FFT is a CST Platinum Partner.